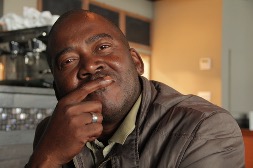 Themba Lonzi is a musician, actor, community organizer, activist, and a reconciliation practitioner. Themba was a teenager during the years of South African Apartheid, and was present at many protests and marches. He remembers his youth as an angry time where he was forced to grow up very fast and without many options that were not violent. His path towards reconciliation was paved through his work in the arts, where he found a means to channel his angers at first, and later his compassion.